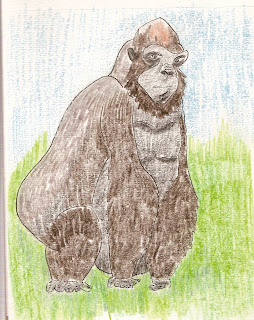 When I was about 4 years old, I went to the circus for the first time. The ringmaster wheeled out an enormous cage with a gorilla in it. The gorilla roared and beat it's chest and shook the bars of the cage. When the ringmaster turned his back on the cage to tell us all how fierce and dangerous this particular gorilla was, the gorilla shook the cage furiously and broke open the door. He bounded off the stage and into the stands, roaring and howling. Further and further he came, closer to where I was. I wanted to leave, tugging on the adults' hands, pleading to go. But they wouldn't move. Closer and closer the danger came. I burst into tears and shrieked. The child-eating monster came right in front of me, reached up its hands - and ripped its own head off!!
That's a cruel joke to play on a small child. I'm sure the man in the gorilla suit thought that by proving he wasn't a real gorilla, I would be comforted. But for many years, I was haunted by nightmares of gorillas pulling their heads off.
This is watercolor pencils in Aquabee journal.
Posted by Lynn at 9/07/2009 03:41:00 PM

Indeed, it was a cruel joke. I'd say twice cruel. Sorry. Kids deserve clowns. To scare us, Grimm Tales are much more fit, I think, so we put our own fears/images into them, and have a chance to sublimate them. Nice drawing, though: an artist can always take something good out of a suffering.
That is the magic of Art.

Love and lots of chocolate to the four years old Lynn...and to the nowadays Lynn too!
Mus Marina

Great sketch! What a horrible trick to play on a child! I agree, Grimm Tales are much more fitting!

oh, my...cruel, cruel! I hate circuses anyway!!! Those poor animals....Love your drawing of the gorilla: t's like you are facing your fear with it :-)

Great story and sketch, sorry to hear how scared you were! Thanks for facing your fear and sharing.

What a sad story! It should never have happened that way.

Oh my Lord what a horrific memory that is!! Hope this sketch was cathartic!

The gorilla in your sketch looks just a little like he may be sorry he was so frightening. What a horrible thing to do to a child! I can imagine how frightening that must have been!

Ohhhh!! What an awful thing to happen to a little girl! And from the way you tell the story, it is like it was yesterday. Great drawing of the gorilla.

Gorillas... these things are HUGE! I would be terrified seeing them, but yeah... I heard a lot about circus cruelty to animals and that's really sad.
This is a beautiful drawing nonetheless, and your courage to face your face is very admirable!

Oh wow! Definitely need to let Karen know that our next topic needs to be "something that assuaged our fears"! Great sketch!

Good grief, that would have scared the dickens out of me, too! Good story, fine drawing! nancy

I can only imagine how horrific that was to a 4 year old- honestly, sometimes people don't think! great sketch anyway!

Wow. They just don't know what will scare a kid. Great drawing of your monster.