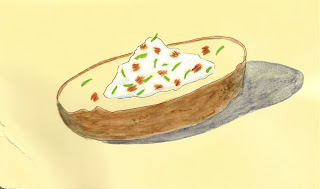 This is a baked potato the way it was meant to be. Baked in a real oven, not a microwave. Garnished with a glob of sour cream - real sour cream, not that no fat abomination that I try to (lie to) tell myself tastes the same as the real thing. Chives, preferably fresh from the garden. Bits of crumbled bacon - real bacon and not that edible oil product that masquerades as bacon. And a liberal grind of black peppers. Yes, I'm a baked potato snob, and I'm not afraid to admit it. There's really no substitue for genuine, fresh ingredients. As someone who loves to cook (and eat), I am constantly dismayed by the plethora of "fake" ingredients that are in the stores. Often they are marketed as being convenient or fast. But don't you have to wonder what's in a product that never, ever goes bad? And isn't it preferable to have a small amount of whole fat products rather than a lot of modified products with parts taken out? If the flavor is left in food, perhaps we would need less of it to be satisfied. And maybe they wouldn't need to add a lot of corn syrup to cover up the lack of natural taste. I ponder these things in the grocery store, and am trying to buy more local and natural ingredients. It just tastes better.

Pretty hard to read this and not want one so very much...My mother's name was Cordelia, Mary Cordelia Field---I'm enjoyng looking at your site very much EJM

Amen and amen and amen! The late, great Julia Child, (whose mantra was "If it were me, I'd add more butter!") -- always preached about using genuine ingredients and practicing moderation when eating. Your baked potato is a righteous one, it makes me hungry!

Excellent drawing. And now I really want a baked potato.

Very nice potato and a good post. I end up using those fake soy bacon bits to make my no fat ranch dressing taste like something I can eat! Yucky but true. I get way too much fat in my diet and have tried to severely cut back. It's almost impossible and still enjoy eating. Really fresh fruits and vegetables are super but I can't get them. Now I want your potato and I don't even like sour cream!