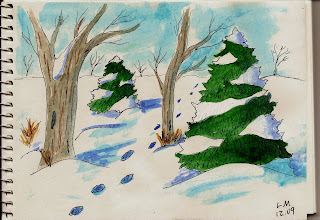 Last week, I was a on a cruise to the Caribbean. It was fabulous! Mere hours after we left, Calgary was hit with a brutal blast of winter. There were recording-breaking cold temperatures and dumps of snow. For most of the 10 days we were gone, the city was virtually paralyzed. We were frolicking under palm trees and leaving our footprints in the sand, but at home it was snow on the fir trees and plodding through the snow. Fort Lauderdale, when we left, was approaching 30 Celsius, hot and steamy, and when we landed in Calgary it was minus 25 Celsius. I think I'll go and draw a palm tree now.
Posted by Lynn at 12/20/2009 10:16:00 AM

Lovely watercolor sketch! In New York, we had our first winter storm. But, I am pretty sure it not as bad as Calgary. I going out to take some pictures and wishing I was someplace warm. It's beautiful nevertheless!

I love your painting--especially the footprints. . .

what a sweet winter scene. love the little footprints too.

Nice sketch, and I agree the footprints add a lovely realism.

We're predicted to have a massive ice storm on Christmas Eve here in Michigan. I envy you off on tropical beaches, though I'm enjoying my white Christmas at the same time. I love your painting it's so perfect for this time of year.

oh yes - that winter paralysis is all too memorable! We had quite a bit down here too. But I've never tried drawing snow - I think I should start now, shoudn't I? Thanks for the inspiration!

Hi Dear
Are you a good person? because you are sit on the cruise and seeing the position of ice,footprints............
Face Painters Calgary