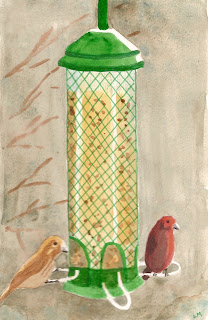 This is the photo for VSD, an excellent photo taken by Stacy Rowan. When I first saw the photo, I thought Irecognized these birds as Pine Grosbeaks who breed in northern Alberta, and occasionally can be seen at backyard feeders in the winter and early spring. However, my backyard in Calgary is a very long way from Stacy's backyard. I checked in the bird identification book "Birds of Alberta" and it really looks like Pine Grosbeaks. Some birds have been known to fly long distances. There is a fabulous documentary called "Winged Migration". The film crew used planes, gliders, and balloons for four years to follow migrating flocks on their long journeys. Some flew for thousands of miles to reach their breeding grounds. There is very little narration in this film, just the sounds of the birds, and natural sounds set to classical music. It's a spectacular undertaking.
Click here for Virtual Sketch Date
Click here for Winged Migration
(Watercolor paint in Moleskine watercolor sketchbook 5x7)
Posted by Lynn at 3/25/2009 07:35:00 PM

Nice work! I like the first plane you emphazise here!

I am another fan of Winged Migration. Thanks for reminding me of that wonderful film!