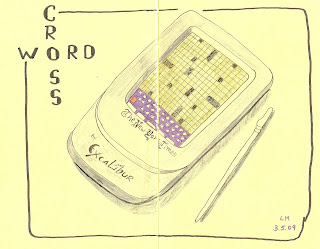 I almost didn't do this challenge. I'm a bit too old for the Nintendo and Xbox craze - I was in my twenties when they burst on the scene and so didn't "take" with me. I don't own a Rubik's Cube or any other hand held game. My nephew informs me that my iPod came preloaded with a few games, but it never occurred to me to check a music device for games. That must be age specific, too. So by default, the electronic crossword device is it. Technically, it's not a game but it is handheld. It holds 1000 New York Times crossword puzzles - easy, medium and hard. It's great in airports and on planes because it's small and light and distracts me from that airport related panic attack that's waiting to happen. I use it almost every day, and I'm sure that I've done more than 1000 of them, but have forgotten the ones that I did five years ago. It's a never-ending source of fresh puzzles! You get clues, select across and down, and type letters using the little stylus there on the right. It's quite an ingenious little toy.
Posted by Lynn at 5/03/2009 07:34:00 PM

It definitely qualifies as a handheld gaming device :)
And it's a very fine sketch too! But Cordelia....nobody is ever too old for Nintendo DS :p

Lovely sketch! Like you, I don't have Nintendo etc - never really my 'thing'. But I do have a PDA with Scrabble loaded and play that every day. Wonderful for making use of time queueing etc!

Wow, you learn somthing new everyday. This is a nice sketch and I really like the formatting on the page

Hi Lynn - wow it's been way too long since I stopped by your blog. I just spent an enjoyable few moments looking over your delightful everyday sketches. I haven't the patience even to do crosswords, I'm afraid - it would probably help stave off Alzheimer's, but I get bored too quickly and give up...

I know that this isn't exactly a comment, but I couldn't find your e-mail address, and I wanted to write and tell you about a new website for artists, musicians, fashion designers, and filmmakers: www.PutItOn.com. I've been using the site as an artist and have my work there, and am trying to support it because I believe in it. Basically, the site allows artists from all over the world to connect, display their portfolios, and sell their work (with NO commission taken!). The site gives artists a FREE gigabyte of space to showcase their portfolios, allows you to stream audio and video works, lets you create live personal broadcasts, and translates any writing into ten different languages. If you could take the time to visit the site, and if you like it too, let your readers know about it, and even sign up yourself or link to it on your site it would be greatly appreciated! We are trying to make a go of helping out artists everywhere and are trying to get the word out, so please help us out if you like the site after checking it out! Thank you!

All the best,
Sarah at PutItOn.com