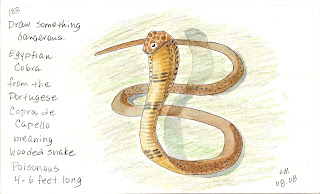 This is an Egyptian Cobra, one of the most dangerous snakes. We don't have many dangerous snakes in Canada, and while searching for information on cobras I found this tidbit on Wikipedia ... "the Egyptian cobra garnered attention in the fall of 2006 when a pet cobra became loose and forced the evacuation of a house in Toronto. For more than six months it is believed to have sought refuge in the home's walls." I don't know about you, but this boggles my mind. Why would anyone want a dangerous reptile for a pet, and why would you let it out of its cage? It's not like you can cuddle with it or take it for a walk. And how do you sleep at night knowing there's a poisonous snake on the loose in your house?
Posted by Lynn at 8/16/2008 12:10:00 PM

we had a boa do the same thing here A BIG one...escaped downtown and ended up in a neighbors house...excitement right? snakes can sometimes push the tops of their cages if they are not well latched...the rest is history...great journal post

Great drawing! And I'm glad it's just a drawing - wouldn't want to actually see one of those in person!

Nice drawing! This snake really looks mean, but it's beautiful in its own way. Snakes are fascinating, but scary!

Nice job! You got the shadow just right on this. Are you doing these in a moleskine?