Now we are six 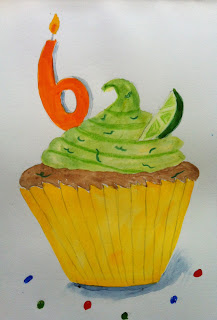 Welcome to the party.  Have a Tequila Lime cupcake.  Throw some confetti around.  We're celebrating because this blog is six years old.  Yes, six! Who knew I could have that much to say. I didn't go public with my sketches until a few months later.  I was new to the whole blogging thing, and it took me a while to figure out the scanning, uploading, security issues, commenting on other people's blogs, and general net safety and courtesy.  The virtual world was a very different world than the one I was used to.  Going public with my sketches was a little intimidating, too.  What if what I found was not a welcoming and charming community of like-minded individuals as I had imagined, but instead a harsh wall of indifference? What if no once came to the party?  But they did (you did) and the community I found was delightful.  I've learned a lot and seen a lot.  The hardest part of the blogging was not putting the sketches forward, but finding something interesting to say.  Sometimes there was a story to be told, or a lesson learned, but sometimes there was nothing to say.
So thank you for being there (and here).  Enjoy the cupcake.
Posted by Lynn at 10/14/2012 04:07:00 PM

Happy Birthday to your Blog. You have developed beautifully since the beginning. Congratulations Lynn

wow ... congrats! This is my first visit and I'm glad to be here. I'm enjoying myself scrolling through your work so I'm glad you took that leap 6 years ago.

Happy birthday! Love the choice of cupcake and the drawing. Thanks for being part of the community.