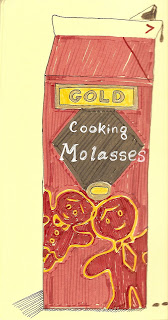 Draw something sticky - yep, this container of molasses certainly is the stickiest thing in my kitchen. I used it to make Anadama Bread for the Bread Baker's Apprentice challenge. Anadama bread has a curious combination of molasses and cornmeal along with regular whole wheat flour. Once I had wrestled this waxed container open by soaking the top in hot water to melt the dried up molassess that had welded it closed, I went ahead and made the bread. But this molasses was far too dark and sweet for this bread, it ended up rather heavy and too molassesy to be considered a real success. It should look like this http://pinchmysalt.com/2009/05/19/bba-challenge-anadama-bread/

The molasses, though, would do well for the EDM challenge. But it's not a real success either. I had a marker that was the exact color of the container - one that had a large nib on one end and a smaller nib on the other. They are supposed to be the same color but clearly the smaller end was darker. It did give me a chance to try out my new white gel pen. It worked well even over black pen. I hesitated over even posting this one, but it was the challenge and I did do it so I will post it.

Don't hesitate! It looks like a great carton of molasses! We all like some of our challenge drawings better than others.

so happy to meet you ... lived in Calgary many years ago (two children born there) ... love your drawings and glad I found you via EDM

I just put up some pics of Alberta skies (not mine, my cousin's) on one of my blogs ... have a peek

Never hesitate, they can't all be your favorite. I like the gingerbread men motif.

I like your drawing! I have never seen molasses in a carton like that. Interesting.I also checked out your link to the Bread Baker's Challenge. That looks really fun! I think you did a good job.