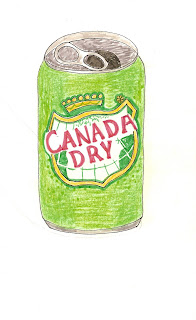 Up here, in the land of the true north strong and free, we call this a "pop" can rather than a soda can. The original name was "soda pop" and I think some regions shortened it to soda and some to pop. This is about the only pop I'll drink, having been born without a sweet tooth. And usually I make it a little tarter with the addition of a shot of good amber rum and a squeeze of fresh key lime.
Also I find in the course of the discussions of the name of this object, that here in Canada we call things by the American names rather than British names of our official heritage - such as trunk, semi, umbrella, and elevator. But we spell with the British style - such as flavour, honour, colour, catalogue, cheque and memorise.
This can is done with watercolour pencils, and brush pens in the little Aquabee sketchbook.
Posted by Lynn at 1/13/2009 07:48:00 PM

As a fellow Canadian and non pop drinker I'd say you have got it all down to a T. Spot on.

A well done sketch! Thanks for the bit of a memory jolt as well...I haven't had one of those in years...decades even! LOL :)

We couldn't be more similar in our approach to this Challenge. (See my blog.)

Don't understand the reference to "umbrella" - what do you think Brits call them?

thank you for the edifying notes on nomenclature!

Just droped by to thank you for your comment on my blog and to confirm that we *do* call them umbrellas - "brolly" is just a colloquialism :)

Nicely done. Love the info on the Canadian / American / UK use of words.

I grew up consuming neither "soda" nor "pop", but "fizzy drinks". My husband (from a different part of the UK) calls it "fizzy pop". I have no idea what might qualify as non-fizzy pop!

I am very fond of the British/Canadian spellings of words such as "colour". The u is quite unnecessary and thus rather beautiful. An embellishment. :)