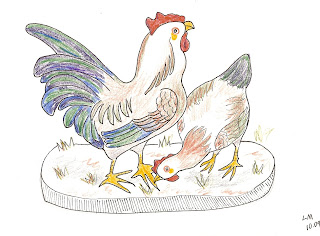 These ceramic chickens belong to my mother, and to my childhood. They have been there forever. Several years ago, my parents moved from a 3 bedroom split level house to a one bedroom condo. The downsizing was ruthless to say the least, yet somehow these chickens ended up in the new condo. When I decided to draw them, I asked my mom about them. Obviously, they had a place in her heart and meant a great deal to her. I sensed a story. She told me that she had finished normal school and got her first teaching job. For the first time in her life, she had more money than she needed. She had enough money to feed, clothe and house herself and some left over. Money left over that she could buy something for no other reason than that she wanted to. One day she passed a store, and saw these chickens in the window. She went in and bought them, for no other reason than that she could and she liked them. An impulse buy, a silly purchase. But nearly sixty years later, she still likes these chickens. And isn't that really the definition of "tzatchke"?
Pentel pen and watercolor pencil in the Robert Bateman sketchbook
Posted by Lynn at 10/06/2009 07:09:00 PM

Wonderful story to go along with your delightful sketch.

Lovely sketch! :) A drawing is always a lot more beautiful with a great story to back it up, this one has it!

Really like your tztachke - had to chuckle at the one pecking at something under the foot of the other. Lots of personality. And the stories that go along with our treasures only make them moreso. Just look how an impulse buy reaches out across 2 generations!

Perfect interpretation of the word! And you'll now appreciate those chickens even more if you have them in the future. Lovely sketch.

Nice work. I especially like the way you used the ink and pencils. The story is as precious as the chickens.

It's a lovely story, and a beautiful drawing of the hens.
Janice.

What a sweet sketch and I loved the story! It made the sketch even sweeter for me. :-)

Love the story on this one! Great sketch!

I have to agree with everyone...love the story behind the picture. Good job.